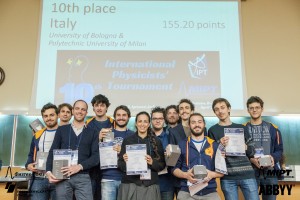 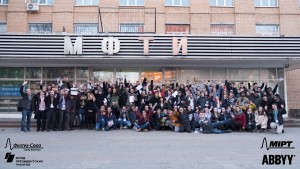 At the “Sala Consiglio” of the Department of Physics the students of the 1st year of the PhD School will be held on October 10 and 11, 2017 the end-year seminar. See the web page http://phd.fisica.unimi.it/students/workshop/.

Interviews will take place in september (foreign applicants can be interviewed via audioconference, by request).  More details are available here.

Potential candidates are invited to contact the secretary to get  help with the web procedure for applications, which has now been activated (see this link ), in order to prepare their application well in advance.  See also our Poster here.

17 PhD positions are available this year.

The Italy Chapter of the IEEE Nuclear and Plasma Science Society is pleased to announce the first edition of the Best Ph.D. Thesis Award in memory of Emilio Gatti and Franco Manfredi. The award will be presented to distinguished young scientists who have completed a Ph.D. thesis in the field of Radiation Instrumentation for fundamental and applied research. The prize consists of 500 Euros and a Certificate.

Each year certificates will be also awarded to the two runners-up and will be awarded at an IEEE NPS Italy Chapter event.

Nominees will be judged by September 30th, 2017 by a Panel of three experts in the field of radiation instrumentation, to be appointed by the Executive Committee of the IEEE NPS Italy Chapter, on the basis of their CV, PhD thesis and publications. The deadline for nomination is June 30th, 2017.

All details for nomination and on the Emilio Gatti and Franco Manfredi Best Ph.D. Thesis Award in Radiation Instrumentation can be found on the award website: http://www.npss.polimi.it/GattiManfrediAward/

Giovanni Savini (PhD student c/o the Department of Physics, Università degli studi di Milano) and Fulvia Palesi (Researcher c/o the Department of Physics, Università degli studi di Pavia) won the important international challenge “TraCED” organized by the International Society for Magnetic Resonance in Medicine (ISMRM). The challenge focused on the reconstruction of cerebral connections starting from magnetic resonance data. The two researchers submitted an original and innovative method for the reconstruction of tracts connecting cerebral regions (tractography) working with enthusiasm, creativity and commitment to research and proving international competitiveness. This research project is being developed within a collaboration between the Università degli studi di Milano (Prof. Alessandro Lascialfari) and the Brain Connectivity Center in Pavia (Prof. Claudia Gandini and Prof. Egidio d’Angelo).
38 teams from all over the world joined the challenge, but only 9 were able to complete the task and a total of 46 different algorithms were submitted. The one proposed by Savini and Palesi resulted the best on the basis of thorough evaluations.
Moreover, the young researchers distinguished themselves for their innovative scientific research at the ISMRM annual meeting in the USA. In particular, one of the submitted works, developed and presented by Giovanni Savini, won the “Summa cum Laude” award given to the best 5% of all accepted abstracts (over 5600).

First picture: the winner team, Savini (at the center with the trophy) and Palesi (on the left). Following pictures: images from their work. 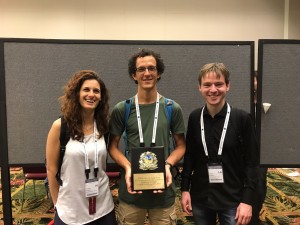 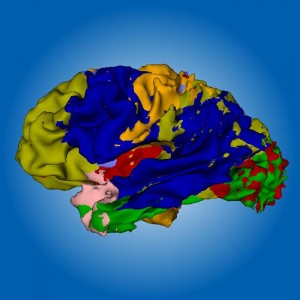 The European Training Network ColOpt (Collective effects and optomechanics in ultra-cold matter) is inviting applications of highly qualified and ambitious early state researchers for three year research or research & development projects. In total 15 positions are available at 12 partners. Candidates hosted at university nodes are expected to participate in the PhD programme of their host institution.

For the first time the LHCb experiment at CERN has measured an asymmetry between baryonic matter and antimatter. Baryons are particles composed of three quarks as the protons and neutrons that constitutes the matter that we know. Such asymmetries have been measured in the past in the decays of particles composed of two quarks (quark and anti-quark) called K and B mesons, but were never observed in the decay of any baryon. The study of  matter antimatter asymmetries is crucial to answer questions on the evolution of the Universe and in particular how it was possible to reach a state of complete absence of antimatter, if at the the origin matter and antimatter were produced in equal amount, as required by the Big Bang theory. To perform this measurement at CERN were isolated for the first time about 6000 events of rare decays of Lambda-b baryons- particles about 6 times heavier than the neutron, due to the fact that contain a heavy quark called “bottom” – into a proton and 3 pions. Nicola Neri (researcher at INFN Milan) and his research team conducted the study now published in Nature Physics. According to Neri it is a first evidence that must be confirmed with more data but that would open new research opportunities: “LHCb has the ability to measure precisely asymmetries between matter and antimatter even in heavy baryons processes and it will be even more in future after the upgrade of the LHCb detector”. The LHCb group at INFN Milano led by Neri is responsible for the construction of the new silicon tracker to allow to collect a larger amount of data and possibly answer many questions still open on the evolution of the Universe.

We use our own and third party cookies. If you continue browsing we consider you accept the use of cookies.
Accept